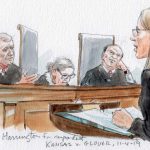 Can a police officer have reasonable suspicion to make a traffic stop solely on the basis that the registered owner of a vehicle has a suspended or revoked license? During Monday’s oral argument in Kansas v. Glover, several justices seemed to take the position that this information, combined with simple common sense, is enough to satisfy the Fourth Amendment, while several others seemed to think something more is required. By the end of the hearing, the looming question was what that something might be. 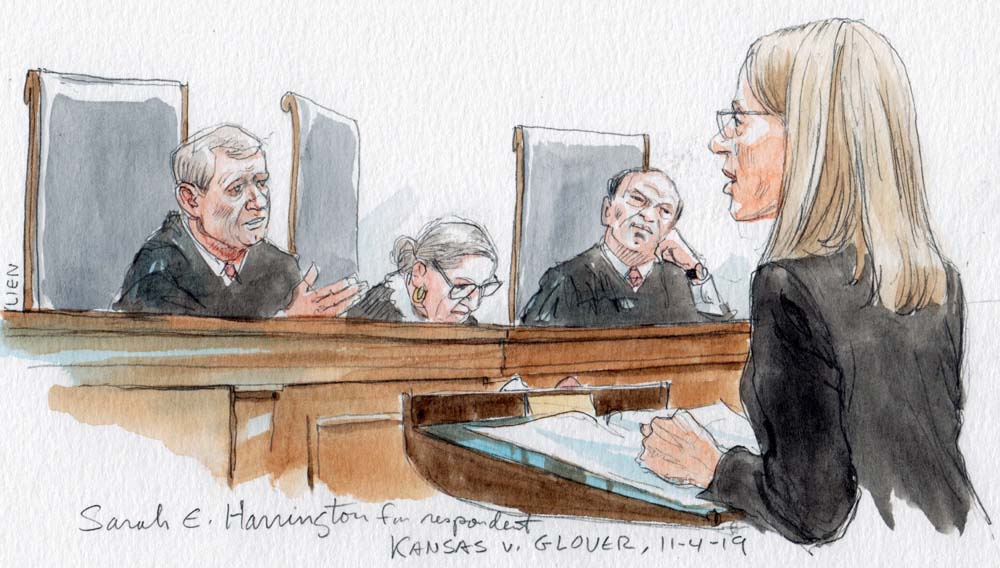 
According to a joint stipulation of facts by the parties, Sheriff’s Deputy Mark Mehrer saw a 1995 Chevy 1500 pickup one morning near Lawrence, Kansas, and ran a check on the registration. He had not witnessed any traffic violations. He learned that the truck belonged to Charles Glover, whose license had been revoked. Although Mehrer did not see who was driving, he assumed it was Glover, the registered owner. In fact, Glover was driving, and he was subsequently charged as a habitual violator for driving with a revoked license.

At trial, Glover moved to suppress all the evidence derived from the traffic stop, claiming that the stop violated the Fourth Amendment because Mehrer lacked reasonable suspicion that a crime had been committed. (Mehrer did not testify at trial.) The trial judge suppressed the evidence, and the Kansas Supreme Court eventually upheld the suppression order. The state court determined that, without additional evidence, Mehrer’s assumption that the owner was driving was unjustified.

During yesterday’s argument, Chief Justice John Roberts quizzed Glover’s counsel, Sarah Harrington, on the probability that a vehicle whose registered owner’s license was suspended or revoked is nonetheless being driven by that owner. “Do you think it’s totally random who the driver is? In other words, it’s registered to Fred Jones, but it could be anybody in the world?”

When Harrington said no, Roberts pressed on. “Okay. Do you think the odds that it’s Fred Jones are 5 percent?” When Harrington asked whether those odds were based on the owner’s having a suspended license, Roberts said no, “just in general.” Harrington agreed to five percent.

“Okay. And where are you going to stop?” Roberts continued. “Surely one out of ten, it’s Fred Jones’s car. And when the officer goes up, he sees that … it’s a middle-aged man and not a teenage girl. Is it still like — is it maybe one out of ten chances?”

“I think it is probably one out of ten that an owner with a valid license is driving his car,” Harrington conceded.

“I can’t say,” Harrington replied, “because this Court has said repeatedly that none of us can say, right?”

When Harrington asked, “How do we know if it is common sense?,” Roberts was not deterred. “I already got you to 10 percent!” he emphasized. 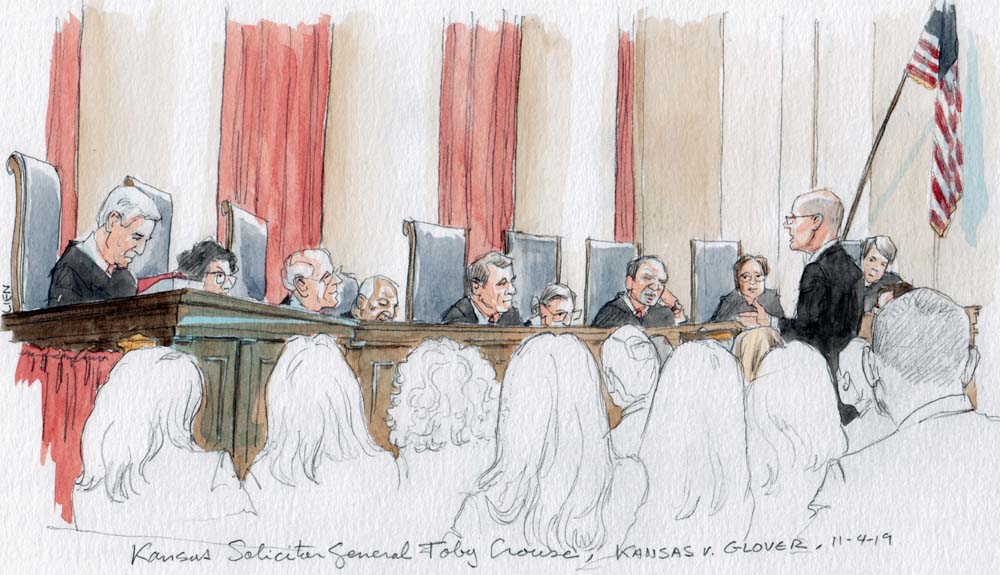 
Earlier, Justice Elena Kagan had questioned Kansas Solicitor General Toby Crouse about a comparison to Florida v. Harris, a 2013 dog-search case in which Kagan wrote for the court. “What struck me in reading this case is that you’re asking for a very different approach than we unanimously decided was proper in that case.” Although that was a probable-cause case, she said, “I don’t think [it] makes all that much difference. The idea was that if you have a trained dog and it gives an alert, there’s a reason to think that there’s drugs in the car.”

Contrasting Harris‘ totality-of-the-circumstances approach with Crouse’s argument that the owner’s not having a valid license was enough in Glover’s case, Kagan went on:

“Yeah, I actually think that’s helpful because it depends upon what the nature of the inquiry is,” Crouse replied. “Here’s it’s driving while suspended and the registered owner and the connection to the driver is common. With regard to a trained dog to sniff out particular drugs, I think there the dog actually alerted to a drug that it was not trained to identify.”

Later, when Roberts was questioning Harrington about what experience the officer would have to possess before knowledge that the car was owned by someone without a valid license would become reasonable suspicion, Kagan alluded to Harris as an answer.

“I mean, it’s just like the dog, right?” Kagan interjected. “Somebody certifies me, somebody trains me, I’ve seen this done by my partner, I’ve heard about it being done by other people in my department.”

If Kagan and Harrington were endorsing a requirement that the officer at least testify that, in his or her experience, a registered owner is usually the driver, Justice Neil Gorsuch seemed dissatisfied. “If that’s all that is at issue here, is that Kansas … neglected to put an officer on the stand to say in my experience the driver is usually the owner of the car or often is, what are we fighting about here? It seems to me that it’s almost a formalism you’re asking for this Court to endorse.”

When Harrington responded that “the question isn’t whether an owner usually drives his car but whether an owner who doesn’t have a valid license usually drives his car,” Gorsuch was not placated. “The officer will now come in and say — and recite — I mean, we’re just asking for a magic incantation of words,” said Gorsuch. Harrington was careful to note that there would be an opportunity for cross-examination.

Looming over the proceedings was the question of what else an officer might have to do to satisfy the reasonable-suspicion standard. Justice Samuel Alito asked Harrington, “What are all of the considerations that you think the officer has to take into account before initiating a stop? Trying to check with headquarters as to the basis for the license suspension? Whether it’s an urban area or a rural area or someplace in between? Whether it’s a highway or a city street? Whether it’s raining? Whether it’s dark? Maybe whether it’s a law-abiding community where people who have suspended licenses never drive?”

Moving on to the trial stage, Alito asked, “After having done that and when there is a motion to suppress, the judge has to take into account all of those factors?”

“Just like in any Fourth Amendment case, Justice Alito, you’d have to look at the full factual context,” Harrington replied. “And here we did not hear from the local law enforcement officer at the suppression hearing. We did hear from the local trial judge, and she said, in her experience, based on her life in the community of Lawrence, Kansas, this was not a reasonable assumption.”

Another possible requirement, supported by Justice Sonia Sotomayor, would be that the officer try to get a look at the driver to see if the age and sex seem to match up with those of the registered owner, provided that the maneuver is safe under the circumstances. But Assistant to the U.S. Solicitor General Michael Huston, arguing for the United States as amicus curiae, countered, “It’s actually not nearly as safe to do that as one might suppose … Officers are trained instead to keep their vehicles positioned behind a suspect because that’s the safest place for them to be.”

Still another possible requirement, raised by Glover’s merits brief, would be that the officer simply continue to observe the vehicle until he or she observes a traffic violation. Justice Brett Kavanaugh expressed deep skepticism.

“I’m trying to figure out what purpose that would serve. Just, okay, instead of stopping right away, I’m going to follow you until you go 31 in the 30, and then I’m going to immediately pull you over,” Kavanaugh said. He called such stops “pretextual.”

Kagan discounted both of these possible requirements. “If I understand you correctly, Ms. Harrington, you don’t really require that anybody be followed until they do something wrong, and you don’t really require that a police officer goes and checks out who’s sitting in the front seat,” she said. “As long as the police officer shows up to the suppression hearing and says, ‘I based this on my training and my experience’ and subjects himself to some form of cross-examination.”

[Disclosure: Goldstein & Russell, P.C., whose attorneys contribute to this blog in various capacities, is among the counsel to the respondent in this case. The author of this post is not affiliated with the firm.]

Editor’s Note: Analysis based on transcript of oral argument.